Eva Forsberg is Professor in Education at Uppsala University and leader of the research unit STEP.

Eva Forsberg earned her PhD in 2000 at Uppsala University (UU), became Associate Professor (docent) in 2010 and is since 2013 Professor in Education. In addition, she has a degree in teacher education and special education respectively, from 1979 and 1984. Between 2001 and 2006 she was a research fellow and from 2001 she was employed as a lecturer at UU. She has also worked at the unit for Academic teaching and learning at UU.

Eva Forsberg has also served as Chairman of the Departmental Board, and been a member of the Faculty Board and its Recruitment Committee. She has been a delegate of the Electorial Board of and its Recruitment Committee. Since 2013 she is part of the Quality Advisory Board of Uppsala University. In 2013 she received Luttemans scholarship to one of the "more excellent docents" of the philosophical faculty. 2014 she was Visting Scholar at the University of Gävle, and in 2016 she will attend KTH, Royal Institute of Technology as vsiting scholar. From 2016 she is an adjunct professor of the Division for Quality Enhancement at Uppsala University.

She is engaged in various peer review activities: dissertation committees, reading groups, opponents, editorial assignments, article reviews, chair and commentator at conferences, etc. Was in 2014 member of one of the Educational Sciences Committee panels for project applications.

The research focuses on governance, management and evaluation of the school, higher education and doctoral education. In particular, the control regime of the school and its assessment cultures has been studied.

Several projects analyses the interplay between politicians/bureaucrats, professionals and researchers and how dominance relations and positions change over time.

A recurring theme has been how different ways to design education have consequences for which norms, knowledge and values ​​that are transmitted from one generation to the next. For example, two topical phenomena that strongly conditions education are globalization and the school as a market. Methodologically, curriculum theoretical and comparative perspectives and policy analysis are often used.

The research unit STEP - Studies in Educational Policy and Educational Philosophy – was established in 2001 and is today led by Eva Forsberg, as one of two scientific leaders. The team also includes a coordinator. STEP organizes the seminar Curriculum Theory and Reform History.

Additional information is available on the research unit’s website: http://forskning.edu.uu.se/step/

STEP established in 2001 an E-Journal that today is a Nordic E-Journal - Nordic Journal of Studies in Educational Policy. Eva Forsberg is one of the four General Editors from Sweden, Norway, Finland and Denmark, respectively. She is also Co-Editor of STEP: Research Reports.

Current projects and assignments that Eva Forsberg leads or participates in investigates higher education as a field of research (VR), leadership of doctoral education (SUHF), effects of systematic reviews (VR), the emerging homework market and its consequences (VR), leadership in goal- and result steering (VR ), and research on teaching - systematic mapping of the field of research. She is also member of a reference group to a research project in Norway on educational governance and learning outcomes.

In addition to networks within the Nordic (NERA) and European (EERA) educational conferences Eva Forsberg participate in a number of more specific networks. These include: THEN - Theory of the Higher Education Network - a joint project between the research groups: STEP and Language and cultural philosophy, UU; The Network of educational right - a joint project between Educational Science and Law, UU; the European Network ERECKS (Educational Reforms in Europe During The 20th Century Meeting the Challenges of the Knowledge Society of the 21st century, the National Network for Studies on Politics in Education, the Nordic Network for Curriculum Theory and the Nordic Network of Studies in Higher Education Development. Previously, networks and centres for praxis-based research were on the agenda.

Most of on-going projects and network collaborations are multi-disciplinary and they are conducted with colleagues at universities in and/or outside Sweden in various disciplines such as Curriculum Theory, Comparative Education, Philosophy of science, Philosophy, History, Business Studies, Political Science and Physical Chemistry. 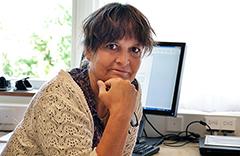