Part-time fixed-term lecturer at Department of Linguistics and Philology

Robert Borges is a linguist whose research has focused the way in which languages change as a result of contact with other languages in multilingual contexts. He has worked on several languages from different language families in around the world, and in 2017 began post-doc position at the Hugo Valentin Centre with a project that aims to document sociolinguistic profiles of a group of young "new speakers" of an endangered West-Germanic language –Wymysorys– spoken in Southern Poland. 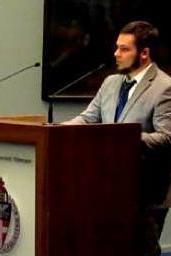