With Daniel Silander of Växjö University, he is conducting an attempt at improving measurements of democratization by incorporating state performance in crisis.

In collaboration with Professor Paul 't Hart of the Australian National University, he has a project called "Party Leadership succession", that theorizes leadership change.

Bynander was a commissioned expert with the governmental investigation into Swedish security policy 1969-89 under the leadership of ambassador Rolf Ekéus.

The doctoral dissertation from 2003 dealt with Swedish security policy and the problems it faced with repeated and protracted underwater intrusions during the 1980s, stretching into the 1990s, and eventually how that problem seemed to fade away in 1992-96.

Currently, Bynander divides his time between the Department and a position as Special Adviser to the Prime Minister's Office. 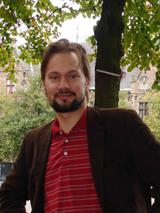