I am a condensed matter physicist with strong interest on renewable and clean energy science. My research group employs density functional theory, along with molecular dynamics and Monte Carlo simulations, to investigate physical-chemical processes in condensed matter that are relevant for energy conversion and storage. More specifically, we are interested on operando spectroscopy, battery materials and photo-electro-catalysis.

Dr. Carlos Moyses Araujo received his PhD degree, in Condensed Matter Physics, from UU. Thereafter, he has held a postdoc position at the Royal Institute of Technology (KTH) in Stockholm with a distinguished scholarship from the Swedish Research Council (VR). As a recognition of his work in Sweden, he has won three research awards, viz. Benzelius prize (from the Royal Society of Sciences in Uppsala), Ångstrom Premium (UU), and Bjurzon’s Premium (the highest award for PhD thesis at UU). In 2011, he has moved for a postdoc in USA, at Yale University, with a prestigious scholarship from the Yale Climate and Energy Institute (YCEI). Besides his work at the YCEI, his research was also carried out within the Energy Frontier Research Center (EFRC) funded by the Department of Energy and coordinated by General Electric Company (GE), in which Yale was one of the partners. This is a large collaboration pursuing a novel energy storage system, and there he was exposed to a diverse network of scientists, specialized in energy materials, involving Stanford University, Lawrence Berkley National Laboratory, University of California - Berkley and GE. In 2014, he was awarded the Young Research grant from the Swedish Research Council, which gave him the support to stablish and expand his research group.

Dr. Araujo’s research combines density functional theory, implicit solvation models, molecular dynamics/Monte Carlo simulations, spectroscopy and thermodynamics assessment to investigate systems spanning solvated molecules, interfaces and bulk materials. The primary objective is to develop novel methods for computer-aided energy-materials design employing first-principles theory. He has initiated three independent research lines that are complementary to the activities of the Division of Materials Theory at UU. The first is related to the operando spectroscopy where he is developing methods to investigate the x-ray spectroscopy properties of complex proton-coupled electron transfer reactions in liquid environment, and lithium insertion reaction in battery materials, through the combination of Monte Carlo and Molecular Dynamics simulations with first-principles XPS and NEXAFS calculations in a sequential approach. In a second project, Dr. Araujo’s research group focuses on the physics and design of novel energy storage materials for applications on Li- metal and organic battery technologies. The aim is to develop a high-throughput computational materials design approach to search for stable and high-energy density electrodes. Finally, Dr. Araujo’s team undertake research also on computational photo-electro-catalysis with focus on the physics of polymeric compounds and 2D materials. For instance, they are investigating two contrasting model systems - semimetallic WTe2 and semiconducting MoS2 – with the primary goal of understanding the interplay between the electron injection and the thermodynamic of hydrogen adsorptions for the hydrogen evolution reaction. All the aforementioned research activities have resulted in a number of publications in prestigious journals, e.g. Energy and Environmental Science (IF: 29.5), Advanced Materials (IF: 19.8), chemistry of materials (IF: 9.5). He has a total of 86 published papers with about 2300 citations and H-index 24. 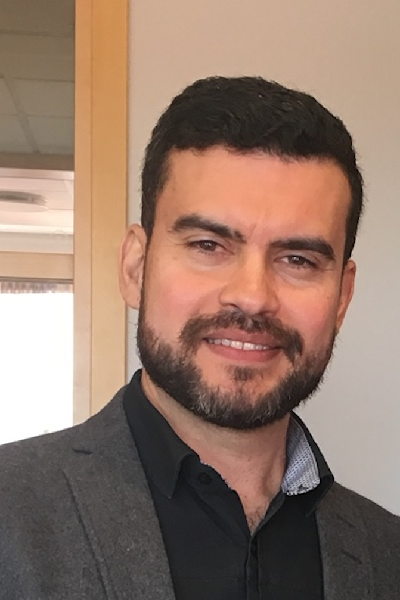